Fort Spokane is an incredibly interesting place, and the grounds hold a lot of history as well.  Most of the buildings that once stood as part of the fort have fallen and little remains.  The main reason being that the area was abandoned for many years before restorative efforts were made on the buildings that were still standing.  Factors that probably influenced the creation of Fort Spokane can probably be traced back 20 years or so prior to the actual construction.  At the time, the U.S. Government was pretty well set on appropriating land through means of forcibly moving the native populations onto reservations.  The story up here in the state of Washington was pretty much the same according to Spokane Historical, and it molded a tense relationship between natives and settlers at times.

Old Chair in the Quartermaster Stable

Down by the river 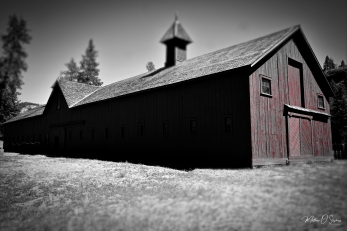 Looking down on the grounds and the river Myself, my wife, and my daughter walking along the Sentinel Trail Looking at the bridge that crosses over to the Spokane Reservation 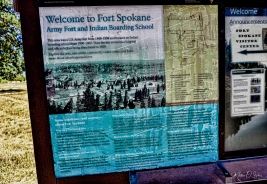 Sand down by the river

This tension increased with the introduction of the railroad to the area, and more natives were forced off of the lands they thought of as “communal.”  They didn’t want to see the land basically privatized and given to settlers, because the tribes depended on the ability to freely hunt, fish, camp, and travel.  In 1880, near the confluence of the Spokane and Columbia Rivers the United States introduced Camp Spokane as a means to keep peace between natives and settlers.  Within a couple of years barracks, storage facilities, and other structures were added, and it was upgraded to the status of a military fort.  For the following several years life was probably pretty average around Fort Spokane, without much hostility between settlers and tribes.  Actually, as stated on Washington, Our Home, “one of the most interesting facts about Fort Spokane is that there was never a shot fired in anger from either the soldiers stationed at the fort or the Indians. And since there didn’t seem to be any expectation of conflict, the Army finally left the post just 18 years after its creation.”

Spokane River looking towards the Columbia Quartermaster Stable through a Lensball

Old chain holding logs together down by the river

Barrel with the quartermaster stables in the distance

Spokane river through a Lensball

At sometime during 1898-1899 the Colville Indian Agency became responsible for overseeing the grounds and facilities.  They went with the idea of utilizing it as a boarding school for natives, as to teach them the ways of the settlers.  Essentially the native children were forced to learn certain western teachings, so they could more easily acclimate into the culture brought by the settlers.  Much of the native culture was squashed, restricted, or swept under the rug, as was the case across much of the United States.  The National Park Service calls the native experience at Fort Spokane as a “microcosm” of what they endured all over the nation.  After things quieted down for the boarding school, the structures then served as a tuberculosis hospital until 1929 or so when it was disregarded and abandoned.

Horse shoeing room with tools in the Quartermaster Stable

Looking from one end of the Quartermaster Stable to the other

Looking upstairs in the Quartermaster Stable Some of the horses name plates were still in place

Section of the Quartermaster Stable

Old wheels in the Quartermaster Stable

Now, we can visit the place to learn about the history and see the displays.  For families visiting, they participate in a Junior Ranger program that allows kids to learn through completing tasks around the park.  Activities involve, but are not limited to hiking the Sentinel Trail, spotting and documenting wildlife, watching one of the available demonstrations, etc.  There are numerous displays to see, and they help to describe what life was like.  One of the most interesting buildings as I experienced it is the Quartermaster Stables, as it houses a numerous amount of artifacts.  This is one of the few surviving buildings, and it is open during the spring and summer months along with the museum and visitor center.  Not to mention the fact that Fort Spokane is very close to other great areas of interest such as Hawk Creek Falls, and is part of the Lake Roosevelt National Recreation Area.  An adventure to the area can lead to a pretty unforgettable day trip that should be experienced if at all possible.