Adventuring in the Pacific Northwest is pretty easy with all of the incredible landscapes in the region.  Sometimes it can be overwhelming trying to choose where to go or what to do, simply because there are so many options when considering the great outdoors.  Well, one area I would highly recommend would be the area surrounding Banks Lake and Steamboat Rock State Park, but you will probably need to visit more than one time in order to see all of the wonders this place has to offer.  The time of year in which you visit is also a major factor, because this place has several waterfalls that are only active from February into early and mid Spring.  My daughter and I visited the area on February 25, 2018 and we had an amazing time exploring, learning, and viewing the sites.

The two obvious natural settings that people should take in are of course the lake itself, which stretches 27 miles, and is home to a variety of fish.  Species include, but are not limited to, smallmouth and largemouth bass, rainbow trout, yellow perch, kokanee, walleye, and more.  This makes it an ideal spot for birds of prey to hunt for fish, and then return to the towering cliffs that run along the lake. 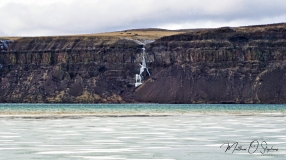 The  Washington Department of Fish & Wildlife  describes Banks Lake as being “ringed with basalt cliffs and talus slopes” which are colossal as you stand beneath them to watch the waterfalls.  When the falls are frozen and ice chunks break off, the thundering sound of ice smashing against ice is deafening as it echoes off of the cliffs.

We can’t forget about Steamboat Rock when we are talking about the cliffs either, as it sits atop the largest peninsula that juts out into Banks Lake.  It rises an incredible 800 feet above the lake and is roughly 600 acres on the surface.  It also has an incredible amount of things to offer any park visitors and campers. 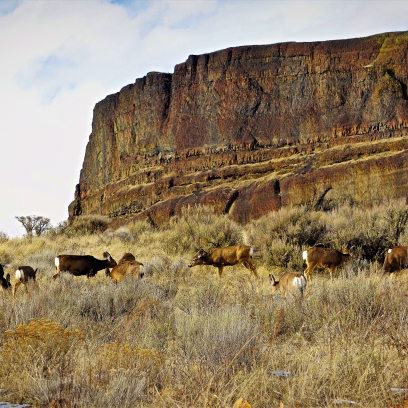 Deer grazing at the foot of Steamboat Rock

According to www.stateparks.com “Steamboat Rock is a long-established area landmark, first used by nomadic Native American tribes and then by early settlers. The military currently uses the area for aircraft flying training missions.”  The area history before people were there simply points to a lot of glacial activity and ice age floods that helped to create the landscape we see today.  During the warmer months, the camping amenities are top notch and sites are scattered throughout a handful of areas.  Washington State Parks is another great resource for anyone interested in learning about what the park has to offer, any camping fees and regulations, etc.  As with other state parks in Washington, the Discover Pass is required for vehicle day use, or you can pay the required daily fee at the park station.  Next, we can learn a bit more about the area waterfalls.

Here is a brief narrative of the area:

Most of the areas waterfalls are unofficially named, except for Martin Falls, which was frozen solid at the time of my most recent visit.  I was able to find Paynes Gulch Falls, Rusho Creek Falls, and several others during my short day trip there.  Here is a short narrated clip featuring a few bits of what the area has to offer, but keep in mind I went a bit early in the season and the waterfalls were pretty much frozen solid. 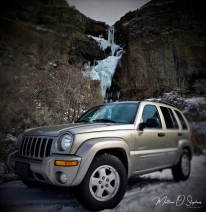 Although my daughter and I didn’t see it when we visited, Martin Falls is the only officially named waterfall in the area according to the World Waterfall Database.  We didn’t get to see it, because we may have been early in the season, as nearly all of the waterfalls were frozen or barely flowing.  In either regard, they were all still very majestic and can all be found by browsing through the database mentioned above.  Most of these waterfalls are dropping from a very high distance, varying from just over 100 feet to an enormous 504 feet.  All of these points being made, this area is a spectacular place to visit and I certainly hope to visit again in the near future.

4 thoughts on “Frozen Falls, and That’s not All”