If you are thinking of travel in the Pacific Northwest or in Washington specifically, then Palouse Falls has got to be on your bucket list.  This powerhouse of a waterfall is incredible when the water levels are high, although it is quite majestic throughout the entire year.  The tremendous landscapes draw in large numbers of people, and on March 18, 2014 it was officially made Washington’s state waterfall according to the Washington State Parks website.

Photographers and artists alike make every effort to capture vibrant sunrises and captivating sunsets.  Palouse Falls does have a specific area with designated paths for walking, however there are a plethora of paths that lead to a multitude of incredible viewpoints, including the very edge of the waterfall looking down. 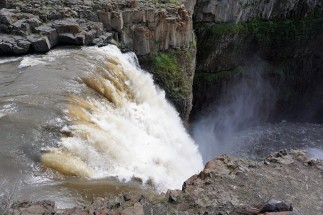 Standing at the edge of Palouse Falls 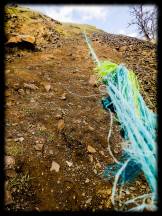 After rappelling down the incline, I took a photo looking up the rope 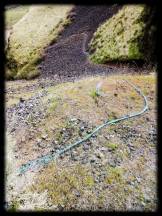 Looking down the hill to the trail I wanted to hike

Selfie at the top of the hill I wanted to climb

Warning signs are in place, because there is a pretty good risk of falling if hikers are not careful.  I went on several of the trails outside of the state park area, and found it to be quite an adventure although I recommend staying in the designated area unless well prepared.  One of the trails off by the railroad tracks had an old rope tied around a large bush and I was able to utilize that rope to rappel down the incline and reach the trails below.  That rope would serve as my only way back up the hill as well, making this trip more of an adventure than I had initially thought it would be.  This point is where I had my first interaction with some local wildlife, as I happened to spot a solitary yellow bellied marmot at the top of the hill, and another dozen or so down tucked into the rocky hillside below.  Other animals that visitors can possibly encounter are different birds of prey such as Peregrine Falcons, Golden Eagles, and Swainson’s Hawks.  These birds of course can occasionally be seen perched along the basalt cliffs or flying around scouting an area for possible food.  In the springtime, tourists to the area can expect to see some nice wildflowers growing as well.

Bend in the river just before Palouse Falls The tall rocks that stand right next to the waterfall

Rapids before the waterfall

Texture in the canyon wall 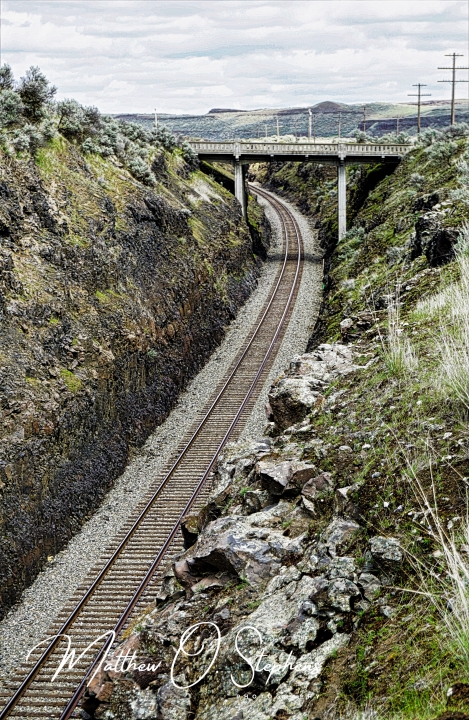 Visitors cross this bridge as they go into the state park

A tiny human in an enormous landscape

Texture of the rocky wall 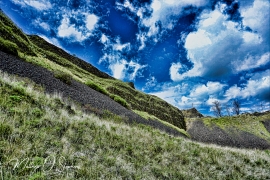 The waterfall has quite an extensive history, both geologically and culturally.  According to many sources there is a tale once told by people of the Palouse Tribe, the Palouse river and waterfall were the scene of an epic battle between 4 giant brothers and a mythical creature called “Big Beaver.”  Story has it the brothers chased and attacked the creature 5 times, and each time they struck “Big Beaver” with a spear it caused a bend in the river.  The creature fought fiercely and valiantly during the fifth attack from the brothers.  The struggle tore out an enormous canyon, and this is where the river fell over the ledge and became Palouse Falls.  The canyon walls are said to show the jagged edges from “Big Beaver’s” claw marks.  Also, as mentioned on www.stateparks.com the waterfall was once called “Aputapat” meaning “falling water” or something close to that, but was later changed to honor the Palouse culture.

Downriver from the waterfall, you can see the mist from Palouse Falls

Looking downriver from a ridge above Geologically the canyon’s creation goes back around 13,000 years to a time of Ice Age Flooding and glacial movement, leaving Palouse Falls as one of the few remaining active waterfalls along this ancient glacial flood path.  The floods of that time were said to be extremely violent and catastrophic.  The park has plenty of information signs and a kiosk available for people to learn a bit about the floods.  These Ice Age floods left a destructive path as the ice, water, and mud ripped tons of rock and earth away to carve the canyons in parts of eastern Washington and the Columbia River Gorge on the way to the ocean at speeds possibly reaching close to 60 mph.  The state park here is also one of the more active camping areas in the region, so some pre-planning is almost essential if you want to make it in during low traffic times. Palouse Falls and the river with canyon

Long exposure of the waterfall Bend in the river before the waterfall Looking uphill after nearly reaching the bottom of the hill

Texture of the rocky wall The hiking trail went through this rockslide area 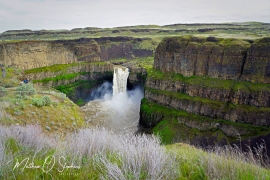 Mist of the waterfall and the canyon Marmot making sure the coast is clear

Palouse Falls from a side angle

Campsites are available, and a lot of good information can be found by once again going to www.stateparks.com for price listings and regulations specific to Palouse Falls State Park.  A quick rundown shows that standard sites run $15, while utility sites are a bit more at $21.  Visitors can also expect to pay dump fees when using the dump station.  Campsites allow up to 8 people per site, and second vehicles can remain parked for an additional $10 per night.  Campers are allowed up to 10 consecutive days during the busy season, and they stay is extended to 20 days between October 1st and the end of March.  A Washington State Discover Pass is also required, or visitors will have to pay the park entrance fee of $10 for the day also.  Anyone visiting the park and waterfall will certainly be in awe of the massively majestic landscapes, and the crushing current that cascades nearly 200 feet into the canyon below.  Just remember to stay happy and stay safe when visiting!

Here are a few clips from my hike through the area: